At deepsense.ai, we strive to make our mark on the cutting-edge research leading towards intelligent machines by providing practical machine learning tools and designs that make it much easier for scientists to track their experiments and verify novel ideas.

One particular step towards achieving this ideal was distributing a state-of-the-art Reinforcement Learning algorithm on a large CPU cluster, allowing super-fast training of agents that learned to master a wide range of Atari 2600 games. This post contains a brief description of our Distributed Deep Reinforcement Learning experiments. For a more in-depth look you can read our paper on the matter here.

Atari games are a widely accepted benchmark for deep reinforcement learning (RL). One common characteristic of these games is that they are very easy for humans to crack conceptually. Comparing the time it takes humans and computers to master these games can provide a clear indication of the capabilities of modern artificial intelligence. The first approaches to teach an agent to play Atari were developed by DeepMind and required around a week of training. The A3C algorithm developed later was able to achieve human performance in most games and did so with a similar amount of training time. But could computers ever learn faster than us?
Creating such a quick and bright Atari games learner would mean that computers outpaced us in understanding a game environment. The techniques that said agent would use to quickly develop a good grasp of the game could be studied to further develop our understanding of the cognitive features of a human brain. Moreover, faster training would give researchers considerably more flexibility in terms of experimenting and thus make verifying various RL approaches much quicker. Today, we present a Distributed Reinforcement Learning algorithm that efficiently trains on a large cluster of 64 12-core CPUs (768 cores in total). Our design enables agents to learn to play Atari games in as little as 20 minutes. We’re making our implementation available here.

Our achievement and results

By distributing the BA3C (details of single-machine implementation here) reinforcement learning algorithm, we were able to make an agent teach itself to play a wide range of Atari games rapidly, by just looking at a raw pixel output (game screen) from the game emulator. Our best experiments were distributed across 64 machines, each of which had 12 Intel CPU cores. In the game of Breakout, our agent achieves a superhuman score in just 20 minutes, which is a significant reduction of the single machine implementation learning time.
Training for Breakout on a single computer takes around 15 hours, bringing our implementation very close to the theoretical scaling (assuming computational power is maximized, using 64 times more CPUs should yield a 64-fold speed-up). The graph below shows the scaling of our implementation for different numbers of machines. Moreover, our algorithm exhibits robust results on many Atari environments, meaning that it is not only fast, but also adaptable to various learning tasks. 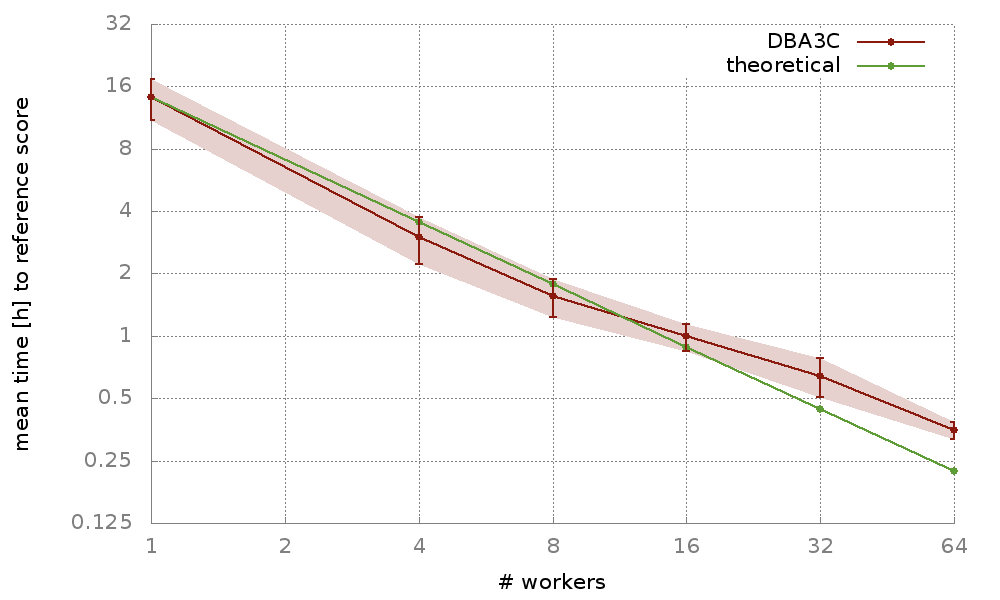 Graph showing the mean time of our algorithm (DBA3C) to achieve a score of 300 in the game of Breakout (average score of 300 needs to be obtained in 50 consecutive tries). The green line shows the theoretical scaling in reference to a single machine implementation.

Using Neptune, a tool developed here at deepsense.ai, we were able to proactively track the performance of our agents. This enabled us to instantly verify if a certain feature of the algorithm works as expected. In Neptune, we could observe our agents’ real-time scores along with many other experiment-related metrics that we later used to optimize the algorithm. The graph below shows training curves from 10 different experiments on the Breakout game. Graphs were updated live in Neptune as the training went on. 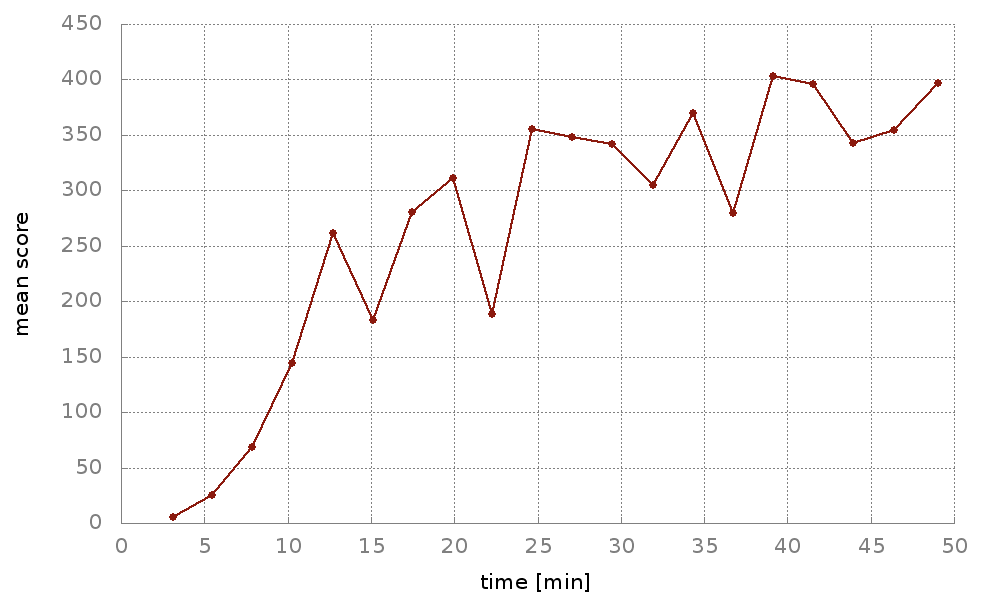 We managed to achieve very competitive training times. As we hope to inspire further research in the RL domain, we decided to open-source the implementation of our distributed reinforcement learning algorithm.

Details of the implementation

In the following section we describe the technicalities of our distributed set-up, aiming primarily to address a more advanced audience. To get the most out of our description, we recommend readers familiarize with this study done by the Google Brain team.
For parallelization we chose the synchronous paradigm. Synchronizing all our workers yielded much faster training times than the asynchronous set-up, where each node works for itself. Using a synchronous design prevented our model from using stale gradients in the updates, but at the same time introduced a problem known as slow stragglers. As suggested in the Google study linked above, deploying a few more backup workers can significantly reduce the impact of the slow stragglers, and doing just that has worked very well for us.
One of the biggest challenges that arises when dealing with largely distributed training is the cluster interconnect congestion on the parameter server nodes. Sending the gradients from multiple workers to a single parameter server bottlenecks the pipeline, effectively slowing down the training process.
To deal with that, we first reduced the model’s size. We noticed that a contraction of the neural network did not affect the accuracy of the algorithm, but did significantly increase the number of points processed per second, and hence also its speed.
Since the communication overhead between the workers and parameter server was the biggest impeding factor to the speed of learning, we decided to balance the pressure on the pipeline by adding more parameter servers. This way, with the model weights distributed uniformly on multiple parameter servers, our training times began to pick up speed. The increase in processed data points per second for a different number of parameter servers can be seen below. 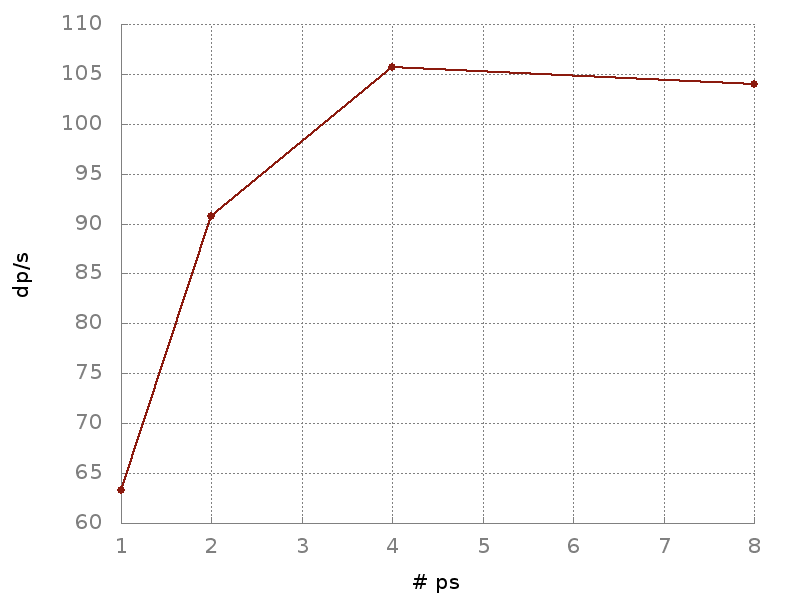 The distributed paradigm has been a topic of extensive research. Parallelization on 256 concurrent GPUs recently enabled a Facebook team to efficiently train the Resnet-51 model in one hour. Later developments from UC Berkeley reduced the time of training ImageNet to merely 24 minutes. The development of a distributed evolution strategy (ES) algorithm has led researchers from OpenAI to train agents to play Atari games in one hour by using 720 parallel CPUs. Since none of these designs have ever been applied to classical RL, the work done here can be considered pioneering in the field of distributed reinforcement learning.

The work on this distributed reinforcement learning design would not have been possible without the services of the PL-Grid supercomputing infrastructure, which provided us with all the computational power needed to conduct this research. We would like to thank Henryk Michalewski from the University of Warsaw for supervising the project and granting us access to the PL-Grid. We also used tensorpack, developed by Yuxin Wu, a very efficient open-source implementation of the A3C algorithm.

This site uses cookies. By continuing to browse the site, you are agreeing to our use of cookies.

We may request cookies to be set on your device. We use cookies to let us know when you visit our websites, how you interact with us, to enrich your user experience, and to customize your relationship with our website.

Click on the different category headings to find out more. You can also change some of your preferences. Note that blocking some types of cookies may impact your experience on our websites and the services we are able to offer.

These cookies are strictly necessary to provide you with services available through our website and to use some of its features.

Because these cookies are strictly necessary to deliver the website, refuseing them will have impact how our site functions. You always can block or delete cookies by changing your browser settings and force blocking all cookies on this website. But this will always prompt you to accept/refuse cookies when revisiting our site.

We fully respect if you want to refuse cookies but to avoid asking you again and again kindly allow us to store a cookie for that. You are free to opt out any time or opt in for other cookies to get a better experience. If you refuse cookies we will remove all set cookies in our domain.

We provide you with a list of stored cookies on your computer in our domain so you can check what we stored. Due to security reasons we are not able to show or modify cookies from other domains. You can check these in your browser security settings.

We also use different external services like Google Webfonts, Google Maps, and external Video providers. Since these providers may collect personal data like your IP address we allow you to block them here. Please be aware that this might heavily reduce the functionality and appearance of our site. Changes will take effect once you reload the page.